The Bells of Christ the Saviour

A fine peal of eight bells has been rung at Christ the Saviour since they were hung in 1852, after being cast at Whitechapel Bell Foundry. With the tenor weighing 13 cwt., they span an octave from F to F. The bells ring out to proclaim to the world that the church is to celebrate High Mass on Sundays and festivals, and before Evensong on Sundays, as well as for weddings and special occasions. They ring half muffled on Remembrance Sunday, for All Souls, and before midnight on New Year’s Eve with the parting of the old year. A single bell may be tolled before a funeral. Also every morning, at midday, and early in the evening the Angelus bell is rung, indicating the times when the Angelus is recited in memory of the Annunciation. 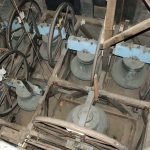 The system of ringing the bells is the same unique method that started in England in the 17th century, requiring each bell to be rotated in a full circle. Each ringer controls the speed at which a bell is rung and can thus alter the order in which the bells are struck, thereby producing “changes”. Learning to handle the bells and to ring them rhythmically as well as in the correct sequence is a fascinating pursuit involving the brain, the eyes, the ears, a modest amount of physical exercise, and teamwork with the other ringers. 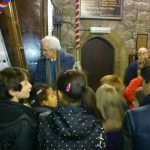 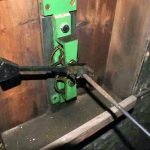 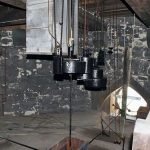 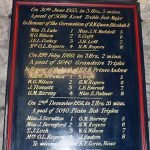 The ringers are men and women, both young and old, and from all occupations. As well as ringing at Christ the Saviour they ring at other churches, and meet socially for meals, and on expeditions to ring in country villages, or on striking competitions with other ringers.

Anyone who is interested in seeing the bells being rung and having a go themselves is welcome. They should come up the tower via the spiral stairway (63 steps !) from the small outside door at the bottom any practice night: