The church was consecrated by the bishop of London on 30th June 1852 and given the dedication of Christ Church, Ealing. It was designed by the best-known architect of the time, Sir Gilbert Scott.

The total cost was met by Miss Rosa Lewis, daughter of a Liverpool merchant who had settled in Ealing. Although Ealing was an ancient village, it quickly became a popular suburb following the arrival of the railways and easy access into central London. It had leafy avenues of large houses and was known as the ‘Queen of the Suburbs’. 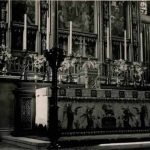 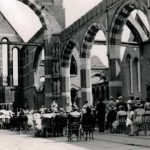 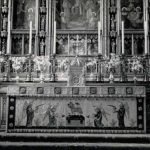 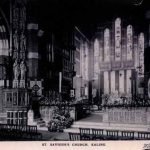 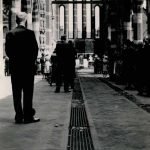 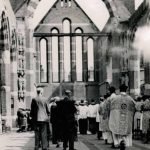 The new parish of Christ Church was carved out of the ancient parish of St Mary’s. In 1902 the church was considerably embellished by G. F. Bodley, and the cost was borne by Miss Trumper. A new sacristy was built and attached to the church by a ‘cloister’ passage, the organ was rebuilt under the west tower arch, the rood screen, the chapel screens, the statues of St James, St Paul, and King David were also added. The murals and the decoration of the roof were also done. There is a ring of eight bells. 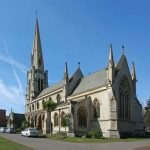 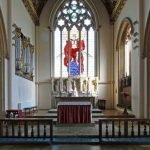 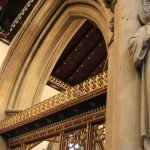 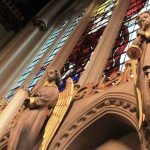 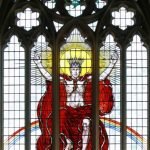 St Saviour’s had an enormous following and was an extremely active parish. The church stood within the boundary of St Saviour’s School, which is now Christ The Saviour School at The Grove site. Streets of small terrace houses stood on the site of the present shopping centre.

During the Second World War, St Saviour’s was destroyed by incendiary bombs. On 16 November 1940 a temporary church ‘Little St Saviour’s’ was set up in the parish hall. The blast of a bomb that exploded on the other side of the Broadway blew out most of the glass of Christ Church and damaged the roof. The windows were restored with clear glass, though a few fragments of the old remain.